Only 2 days left until we launch the Indiegogo campaign for the world’s first open source, decentralized smart speaker! It has been amazing to see the excitement for Volareo.

You’re a big advocate of independent music and underground/ sub-genres being heard. Where do you see the state of things in this post-internet culture?

We live in a paradox.

On one hand, the tools for creative production are in abundance – with decent music production software available (much of the time for free) and a multitude of platforms like Soundcloud and Bandcamp for the self-releasing artist. Actual expression is liberated through post-internet culture.

However to answer your question: “being heard”. There is an abundance of music being made. So much so that once an artist uploads a tune onto their platform it can feel like dropping a coin into the ocean. Who will hear?

The post-internet artist has to decide if non-musical platforms such as Instagram are important to their chances of being heard (and potentially they could be). The problem is these can encourage a shortsighted approach to the values that I believe can build what is the real post-internet strength: Community (I’ll go onto the subject of community in more detail further in these questions).  The artist is offered temptation to enter a quest for immediately tangible responses like YouTube plays and social media “likes” yet here all an artists see or hear is their own reflection.

The solution, I feel, is in a nurturing network. Liberated out of the expectation a label may place on an artist to deliver on their hype, artists need to think in the long term, nurturing of their global family – this means “liking” things not because you expect something back, but because you actually really like something, it involves the artist not directly striving for success (yes, you’ll most likely need another job) but genuinely supporting and following other artists that they really, really dig.

As a DJ, producer, TV figure and radio/podcast host, what do you find your main role is? What is that you feel the need to contribute with?

My job is to tell the stories of people’s lives through music and show how it connects us all. For me, music is food.

It works the same way – binding and nourishing communities. I loved the late Anthony Bourdain – how he’d use food to talk about the cultural situation in a place and for me, I do this with music.

Within that – it’s about value, communication, expression – and how these elements combine to tell the story of a community (this could be a geographical community like a city, or a post-internet community, connected across the globe through shared values). So, for example, when I discovered the work Music Unite are doing in Berlin with refugees, this is immediately a story I want to tell people.

Berlin as a city has such monumental history – and much of its current rebirth as a city of innovation and liberation can be directly traced back to the unique cultural conditions that made 1980s West Berlin a desirable place for artists to live in. Because of this, you will get the best history lesson of the city from talking to artists that live here.

[Recommendation: In his new podcast “Lost And Sound in Berlin” Paul sets out on a journey across Berlin and meets with people whose lives and loves weave in and out of the rich tapestry of music that spans across this incredible city. You can  check it out here]

Last year, the average music listener listened to around thirty hours of music. That’s astonishing numbers. Yet, ninety percent of musicians don’t have music as their primary income. Where did we go wrong?

I think there are many ways of answering this question, but the angle I’ll take for today is to look at the unprepared artist of the early millennium.

Picture the scene. You’re a music maker, it’s around 2001, the internet has Napster but it’s yet to figure out streaming and the accessible legal downloading of music. You are signed (like I was at the time) to a record label. Much like any other signed artist over a thirty-five year golden run between artists and record labels (beginning with The Beatles writing and singing their own material and ending around, erm, this time) you pretty much get your ass wiped by an A&R assistant. You’re signed to a pre-digital record deal, get paid some money and this allows you to focus on making music. You are totally unaware of the entire process of releasing music, other than the actual making and playing of music.

For my band at this time, Parlophone would manufacture our music, distribute it, organise a PR company to do our press, they found us a publisher, a tour manager (who would then organise entire tours without us having to lift our fingers). We’d sit in the record company offices and yay or nay sleeve designs often created by people we’d never even meet.

At the same time, we thought we were punk because we turned our noses up at other artists who “sold their souls” to songs appear on adverts. *My band eventually sold a song to a deodorant advert. We, in short, were totally separated from understanding the process of releasing music. So when the rug was lifted from beneath our feet we were totally unprepared.

We were artists, not business minded. So when the gulf opened up between digital futures and analogue pasts, we were utterly unable to provide answers for the next generation on musical sustainability.

Artists have had to learn business savvy. If the artists of the early millennium had these skill sets, they could have potentially seen ahead future obstacles. 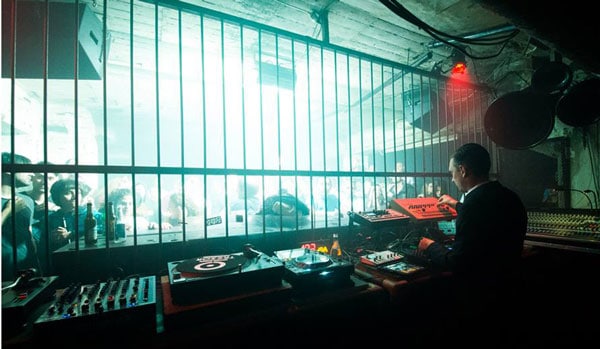 You’re London influenced but have moved to Berlin for a while now. Any differences in the approaches?

London, like, say New York, is more orientated to a hype-based system, where quantifiable success is given unparalleled value. We’re told the narrative stories of an artists success through media/music press – often their stories are chronicled much like a work C.V. is set out – through a list of achievements portrayed over a linear timeline. London loves “the next big thing” and will always be celebrating the flavour of the month. The positive of this is a kinetic energy that you can feel across the city. The negatives are the intensity of the hustle that can often burn people out.

However, in Berlin, more emphasis is placed on space. Rent is cheaper, so the artist has to hustle less to survive, commercial expectations take a backseat. Musicians I meet, talk of the value Berlin’s rich cultural freedom gives them to create. Institutes like Berghain and Tresor aren’t just nightclubs, but occupy near-church-like status for the roles the dance-floor occupied in culturally re-unifying the post-wall city, and partly due to this, I feel, creativity is valued in such a high esteem.

The words ‘blockchain’ and ‘cryptocurrency’ are being attached to word music nowadays. How do you feel about that? Confused? Scared? Ecstatic? Do you own any coins?

I don’t own any coins. as of yet. The potential to liberate artists and creators from old-fashioned hierarchies like Spotify is appealing, particularly in terms of fair payments reaching artists.

Technology has shaped much of music trends. Synthesizers, Mp3’s, streaming, DAW’s. If you had to bet all your money on, what would be the next revolution?

Tech will always cast an eye over what will be the next revolution, yet sometimes predictions are a little idealised – not taking account of yet to develop cultural conditions. I sometimes feel predictions can be rather reminiscent of those age-old flights of fancy that saw monorails running across futuristic cities in science fairs from bygone eras. However, submitting to this uncertainty, the unpredictability of how technology and culture continually fuse is, for me, constantly exciting.

Future revolutions in music so often come from reappropriation. I can think of these two past examples straight away:

And this is what I’m excited about. How advances in VR and AI might be re-appropriated out of their original use and fed back into culture, through social conditions that aren’t even on our radar yet.

So how can this be of use to a tech company? Implementing a strategy to have awareness of street trends and cultural changes outside of the tech (and even music) worlds is the advantage here.

What do you think of the idea of discovering music in a more interactive way by using voice for your queries? Will that make Spotify’s ‘discover weekly’ algorithms obsolete, eventually?

I’m excited about the potential for pushing interactive voice queries into the realms of the creative. Being able to describe what you’d like to hear through whistling half-remembered melodies, clapping in a certain way because it reminds you of the rhythm of something you danced to, even seeing what AI will summon up by you utterly just making something up is exciting.

Creating new language away from the syntax of grammar can, I feel, enhance our daily ambience by allowing us to immerse in our environments without the necessity to scan through the potentially distractive environment of our regular search engines and it’s hazards (click bait, etc).

Decentralized music platforms have the power to overthrow the redundant and extremely bureaucratic way of collecting royalties thanks to smart contracts. Listeners can even tip artists. How does that sound to you?

Good, for artist royalties. A side effect of our post-internet culture is we are so frequently divorced from value – it’s easy to presume something is free if it can be listened to for free on Spotify or YouTube – we are removed from understanding the costs behind what we hear. Bandcamp’s success proves that listeners are willing to pay for music by niche artists and Kobalt’s methods of revenue collection are also, I feel, admirable steps. So I believe there is a future for a decentralized platform to fuse these elements and move them forward.

How does the ideal world of Paul Hanford look like when it comes to music? Is there a big gap between what it is and what you would like it to be?

Music innovation is always exciting for me. That creativity – be it in the artist’s search for new ways to combine sound and expression or it’s fusion with tech, is always moving forward and I’ll always be excited by the multitude of infinite combinations this can create.

At the moment, what interests me is in the underground. Mainstream culture innovates when it’s able to translate underground ideas (be it sonic or cultural or both) to a large audience and right now only a few people, like Donald Glover and Kendrick Lamar in the US are doing this. In 2018,  mainstream is little more than a series of perfume campaigns for the most part set against quantised formula music. Due to the high commercial factors involved, could it be mainstream culture is now a ship that’s now sailed?

Counter to this, I am constantly buzzing from listening to work outside of the mainstream. Although artists may not be able to rely on a full time living from music, they now have the freedom to think creatively, free of commercial pressure. I think with the right mindset, mentioned earlier, where artists set out on a long game of establishing very real and genuine global family, then we are in a richer position than ever.

So for me, the future that excites me is the one where extended lattices of hierarchy-free networks connect, powered by decentralized platforms, populated by ever-shifting families of artists – through enthusiasm, love and experimentation.